The Disastrous and Damaging Effects of Inflation: What it Means for You 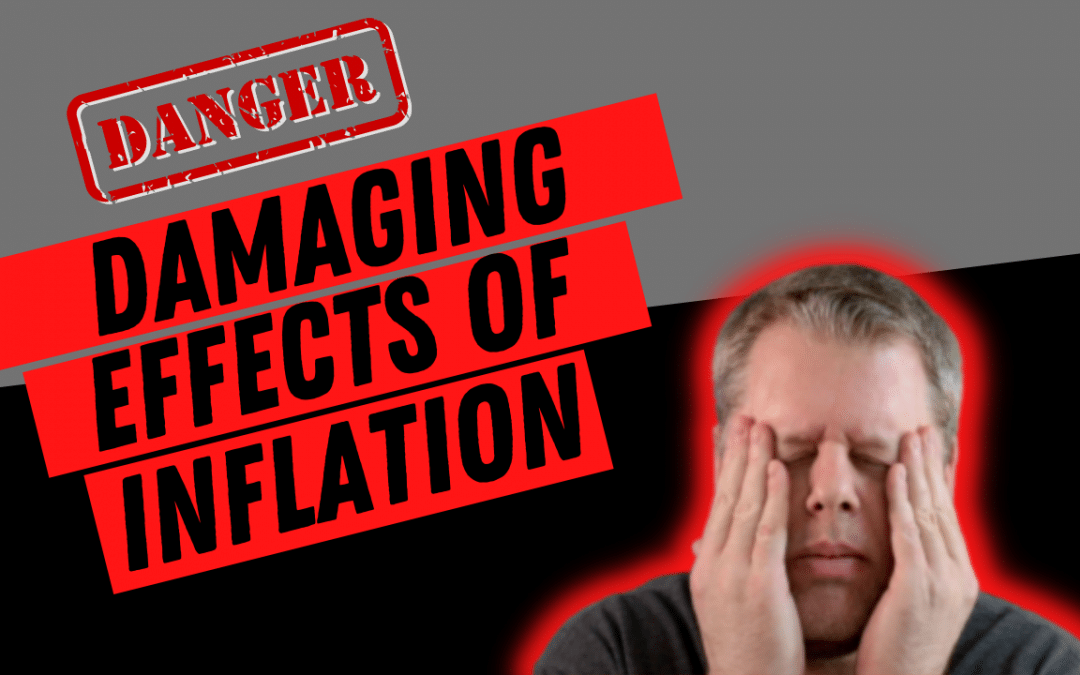 Inflation is a problem that we often ignore. It’s not always front and center in the news, and it doesn’t seem like something that will affect us daily. But, inflation can have disastrous and damaging effects on our lives. In this blog post, we’re going to explore what inflation is, what causes it, who is hurt by it most often-and how you can protect yourself from its negative consequences.

Inflation happens when the value of your money goes down – you can buy fewer goods and services with it now than before. Inflation is a natural result of having an economy that runs on currency instead of bartering or other methods that don’t require currency.

How does inflation happen?

Inflation happens when the government prints more money into circulation – too much money supply means that each unit (dollar, pound, euro) is worth less.

There are several types of inflation, but inflation can distill them into three main categories:

– Demand-pull Inflation happens when the economy is doing well, and there’s too much money floating around for it to handle. Think “too many dollars chasing after a limited supply of goods and services.” The prices go up; people end up paying more for things because their currency is worth less.

– Cost-push inflation happens when there’s too much money in the economy, but it’s not affecting demand because people aren’t buying things (recession). So suppliers raise prices to make up for lower profits. For example, if you own a factory that makes widgets and your costs go up (for materials or labor), you have to charge more for your widgets.

– Built-in inflation happens when prices are going up, but demand isn’t, so companies start making less money from selling the same amount of stuff. Their costs go up faster than they can raise prices (labor goes up, raw materials get more expensive). To stay afloat, they lay off workers or closed down factories.

Why You Should take inflation Seriously

The reasons why you should take inflation seriously are numerous and varied. Inflation steals your hard-earned money. The effects of inflation range from making it harder to pay for everyday expenses to lowering the value of your retirement fund.

First, let’s look at why you should take it seriously.

As already mentioned, inflation erodes the value of money over time, meaning that what seems like a lot today won’t be worth as much tomorrow due to rising prices (more on this later).

Second, the effects of inflation are felt by everyone – whether it’s a high school student buying lunch or an older woman on a fixed income trying to pay for her groceries and medicine each month. Inflation affects all aspects of our lives, from how much we get paid at work (or don’t get paid) to what we can afford at the grocery store.

How inflation affects Your Purchasing Power?

With the cost of goods going up, your money becomes worth less and you can afford less. Inflation destroys the purchasing power of consumers, hurts companies that operate with a margin or have debts in other currencies (e.g., international businesses), and erodes savings for people who live on fixed incomes, such as retirees.

Inflated makes it harder for individuals to buy a house or start a business.

Inflation is the silent killer of wealth.

If inflation is at 5%, your take-home pay needs to increase by at least that much to maintain your standard of living. That means if you do not get a raise of 5% or more, you are losing money!

Inflation can lead to higher interest rates, making it harder for companies and individuals to borrow money – creating an economic slowdown.

Inflation is a problem in many countries. In Venezuela, it is estimated that one year of hyperinflation has led to an 85% loss in the value of its currency. The government has recently announced a new round of economic measures, including increasing taxes and rising gas prices, but these changes are unlikely to impact inflation levels.

How Does Inflation Affect Our Daily Lives?

Inflation is a silent killer in the sense that it happens so gradually. Over such an extended period, we don’t notice how much damage inflation causes to our standard of living until it has already happened. The problem with this lack of awareness about inflation is that we don’t take actions to prevent the damage of inflation.

How to Hedge Against Inflation?

Hedging inflation works by limiting your exposure to it. A good hedge against inflation is buying fixed assets in terms of money or assets whose prices rise when the value of money is eroded by inflation. That means you should buy things like real estate, Treasury Inflation Protected Securities(TIPS), and stocks rather than bonds to hedge against inflation because while bond prices fall in periods of high inflation, real estate, and stock prices rise.

What Assets Help You Beat Inflation?

The assets you should buy to hedge against inflation can maintain their value or even appreciate as the cost of living increases over time.

Inflation Hedge Assets: Gold, commodities, and real estate investments protect an increase in prices. These assets tend to track closely with inflation. However, they don’t always rise with it; if unemployment is high and wages stagnate, prices can fall.

Gold, silver, and other precious metals are a haven in any market environment – even deflationary periods when living costs decline.

Oil is another commodity that tends to track inflation more closely than most assets because it’s used as fuel for many products consumed around the world daily.

Which Assets Make a Good Hedge Against Inflation?

Numerous asset classes can hedge against inflation, including:

Real estate is both an investment and a hedge against inflation. The value of real estate generally rises with inflation, which means that it can act as an effective store of wealth for investors who purchase the property at today’s prices while simultaneously providing some protection from future price increases.

Generally, returns on stocks are expected to outpace inflation over time. Rising prices can generate better profit margins and more earnings and dividends for investors, translating to higher stock prices. There are no guarantees, however, but over time stocks have provided returns that exceeded inflation.

Precious metals like gold are an effective hedge against inflation because the supply of gold is relatively limited. As global demand increases, so too does its price, which means that it will protect your wealth from future inflationary pressures as well.

Physical assets such as gold and silver have performed well during periods of high inflation, but that’s not the only physical asset you should consider. Other commodities like oil and natural gas are also affected by rising prices because they are used for energy.

These US Government bonds are indexed to inflation and offer a fixed rate of return. As such, they’re highly effective in mitigating the effects of inflation. For instance, when prices rise by two percent per year (before taxes), investors can expect their holdings to grow (based upon the Consumer Price Index CPI). When CPI rises, the principal balance will go up along with the interest payment. When deflation happens, the principal balance and interest payment will be reduced.

How Does Inflation Affect Retirement Planning?

Yes, inflation does affect retirement planning, and there are several ways it does.

For one thing, the savings you put away for your retirement will be worth less in terms of buying power when you retire than they would have been if inflation had not occurred. Since people tend to live longer these days (and since we expect our standard of living to go up as we age), it is crucial to plan for inflation.

Is Inflation an Opportunity or Not?

Inflation is typically seen as a risky proposition or as a time where you can buy assets and make money. But inflation is more damaging than many people realize. Inflation today is about the dollar losing its buying power – it’s not making things like it used to in the past, and that means you need to take steps now to protect your hard-earned money.

Inflation is an inevitable and unfortunate reality of the modern economy. Hedge against inflation by diversifying your assets and choosing a portfolio that will protect you from future price hikes. Please do not wait until it’s too late to take action. Your retirement and future depend on it.